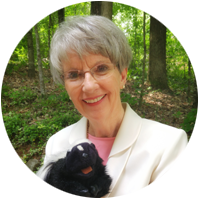 Born in a small town in western Michigan, Adele developed a love for animals and the outdoors quickly. She also has a God given love for children and teaching and decided to pursue a career in education. After graduation from high school she earned her Bachelor of Science degree in education from Western Michigan University in Kalamazoo, Michigan. She continued her education and earned a Master of Arts degree in counseling and an Early Childhood Development Degree.

Now retired from teaching, Adele has turned her attention to putting some of the stories she would tell her students into story form. In fact, The Adventures of Sammy the Skunk actually began over forty years ago. A story teller like her father, Adele would encourage her students to create a character so she could bring that character to life. Sammy became one of the students favorite characters, and the children would sit mesmerized as Adele would create a wonderful imaginary world full of animals and adventures.

One day one of her students asked Adele if there was a book about Sammy. Although it wasn’t a priority at the time to write stories, Adele did begin the first story of how Sammy entered the deep woods and met Mr. Fox. After a recent move, Adele found the old cardboard box containing her writings, and When she opened the box she found the aged colored papers of her first story. It was at this time decided that she would complete a task that so many years before I had begun.

We hope that you and your children will enjoy getting to know Sammy and his forest friends just as so many other children have had the opportunity to enjoy over the years. 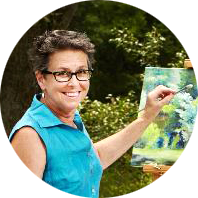 A native of Virginia, Kathy Holland attended the School of the Arts at Virginia Commonwealth University in Richmond VA. She received a Bachelor of Fine Arts degree in painting and printmaking in 1978. That summer she studied wood-engraving with Blair Hughes-Stanton at the Central School of Art and Design in London, England. From 1979 to 1981 she worked as a printmaker at the Creative Arts Workshop in New Haven CT. Since graduation from university she has created drawings, etchings, and paintings, as well as maintaining a full schedule of juried national and international exhibitions and solo shows. In addition she has worked as a freelance graphic artist, medical illustrator, muralist, and drawing instructor.

She emigrated to Canada in 1986, became a dual Canadian-American citizen in 1991, and maintained a home and studio in Deep River, Ontario for over 11 years. During that time her work was exhibited extensively in solo shows throughout Ontario and in juried shows across the US. She moved to Oak Ridge TN in 1997, with a solo exhibition the following spring at the Townsend Gallery in the Candy Factory in Knoxville. Recent group shows include “Realism 2002” in Parkersburg WV; “Exhibition South” (2002 and 2003); “An American Experience” in Winston-Salem NC; “Terrestrial Forces” at the Florida State University Museum (2004); and the annual “Open Show” at the Oak Ridge Art Center, accepted in 11 shows since 1997.